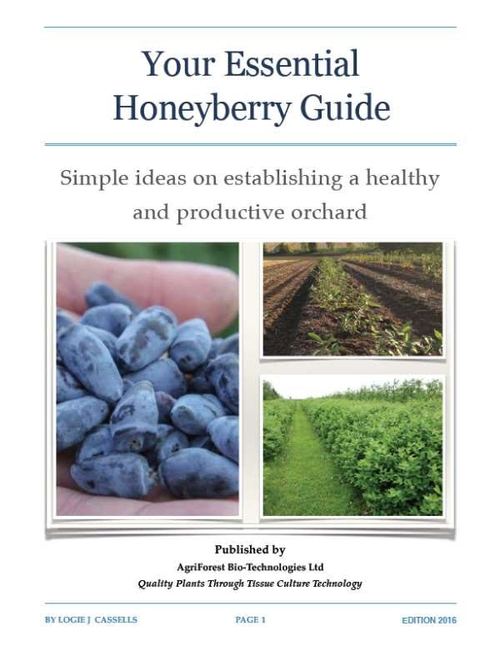 Growing Honeyberry plants and bushes is easier than you might imagine. The agricultural technology in many respects is similar to the cultivation of traditional fruit crops. Honeyberry cultivars (varieties) widely vary between the U.S.D.A. ‘s agricultural hardiness zones. It is imperative that you choose a variety that not only is rated for your zone, but one that will produce the quality of honeyberries that you desire. Berries Unlimited offers a wide variety of honeyberry cultivar varieties for the U.S.D.A. agriculture hardiness zones 2 thru 8. Zones 2-4 are the best to keep those plants happy, zones 5-9 are POSSIBLE to grow but it takes more of Your time to water them carefully through the hot season. If you are unsure of your hardiness zone, or just need help choosing which of the many fine varieties available to you, our staff will be more than happy to assist you in making the right choice. We can also help with buying honeyberry plants wholesale!

One of the advantages of Honeyberries is that they can grow even in clay soil in wildness. They grow well in most soils, but the ideal environment would be loose and drained well fertilized with humus soil because the root system spreads close to the surface. The ideal PH would be 6.5, but the plants can grow in a wide range, ranging from 5 to 8.

When planting honeyberries your plants should be at least 5 to 7 feet apart because certain varieties can range up to 7 feet in diameter. To ensure that you have enough space in between rows, your rows should be at least 14 feet apart from center to center, so that you will not have trouble collecting berries and keeping up plants. When planting 2- to 4-year-old honeyberries the size of the hole should be 10 to 12 inches in depth and 10 to 12 inches in diameter. Rows should be run South to North.

Mulch will significantly increase honeyberries growth and yield. Decomposing mulch not only helps improve soil structure, but also aids in the nutrient uptake of a honeyberry bushes root system. Mulching maintains uniform soil moisture, reduces soil temperature, and controls weeds, but you should leave mulch free spot right after planting to let the roots be rooted in. Berries Unlimited highly recommends using leaf mulch. Better to use mulching BEFORE the winter comes and take away most of the mulch in early spring not to have roots over watered or over heated. When applying mulch, always keep the mulch two inches under the base of the 3+ years old bush because honeyberry bushes' root system is close to the surface. Smaller plants mulch very lightly around stems (1/5th of an inch or less leveled in 1 foot plant base) AFTER they rooted in completely just to cover carpet type roots which always try to be on the surface. Mulch four inches deep and twenty-four to thirty-six inches around honeyberry bushes before winter comes. If your soil is clay you can add additional mulch.

Prevent weed growth around honeyberry crowns by mulching, cultivating, or applying herbicides labeled specifically for use on honeyberries. Do not cultivate more than two inches deep within rows, since most honeyberry roots are in the top 5 to 7 inches of soil. To reduce root injury due to cultivation, a mulch within the rows is highly recommended to keep weeds down. You can leave some grass in between the rows to prevent mud. It also will help to keep water balanced better.

A good-sized, healthy canopy is needed to support the growth of fruit. Pruning encourages production of large, high-quality fruit, and encourages earlier blooming. Fruit is produced on one-year-old wood. The largest berries are produced on the most vigorous wood, so a good supply of strong, one-year-old wood is desirable. When pruning, shape the bush by removing dead and diseased wood. Pruning new bushes is recommended only to remove any dead or dying parts of branches. After the fifth year, prune the bushes annually. Honeyberry bushes should be pruned in late winter while they are dormant, and before the buds swell. Proper pruning (the whole branches) should be done to maintain an adequate number of vigorous main stems, to prevent too much shade inside of the bush (only old not productive branches!), and to stimulate new shoot growth. Excessive pruning should be avoided because it greatly reduces the crop for that year. Keep the bush fairly open by cutting out any weak, old stems that no longer produce strong young wood at ground level. Keep four to six of the vigorous older stems and one to two strong new shoots per mature bush. The new shoots will eventually replace the older stems. It is imperative to have a good balance between berry production and growth of vigorous new shoots to insure proper yield of fruit. Try to avoid cutting off the tops of the shoots because they have the maximum number of flower buds, they give you main crop, so only cut if damaged(broken).

Fertilizer application is often necessary to provide optimum level and balance of nutrients for honeyberry bush growth. Poor vigor and leaf discoloration often indicate lack of fertilizer. Base initial fertilizer uses on the soil analysis. For established bushes, leaf analysis, soil analysis, and observation of plant vigor indicate fertilizer needs. Distribute fertilizer evenly within the root zone and avoid concentrating fertilizer near the crown of the plant. During the growing season try to fertilize three times: The first in early spring with ammonium-nitrate 30g for 2sq ft. The second should be in May with 10-10-10 fertilizer, and the third time in the Fall (October) you can add manure once every two to three years. According to soil type you will have to choose your own plan to fertilize your bushes.

Young honeyberry bushes require frequent watering since the root systems are shallow, usually less than 18 inches deep. Soil moisture content should not be allowed to become excessively dry. Reddened foliage, wilting, browning leaf margins, thin, weak shoots, early defoliation, and decreased fruit set are often symptoms of inadequate moisture. Water the honeyberry bush frequently enough to keep the soil moist but not saturated. Honeyberry bushes need at least 1 to 2 inches of water per week, do not apply water after early September unless the soil is very dry. A rain gauge with a two-inch or greater diameter should be set up in the honeyberry fields to track daily precipitation amounts. Honeyberry bushes may be effectively irrigated by either sprinkler or drip irrigation systems. Drip systems deliver water under low pressure through small emitters. In this method, water is applied only within the rooting area. Since only the row area is wetted, foliage remains dry during irrigation, and weed development between rows is reduced. Mulching will help reduce the frequency of watering. Honeyberries are famous for being tolerant to heat and drought and even over watering, but you should be careful with younger or newly planted honeyberry bushes.

Bees pollinate honeyberry bushes. In many instances, wild bees will be present in sufficient numbers to pollinate the flowers. Bumblebees are more effective pollinators than honey bees. Honeyberries require cross pollination because the male and female reproductive organs develop at different times, so you need at least 1 to 5 different varieties for production of berries.